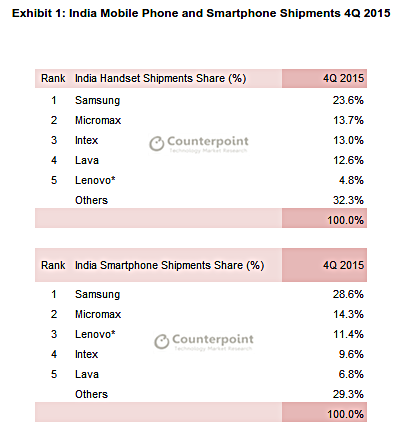 India has surpassed the United States to becomes the second largest smartphone market in the world, according to a new report from market research firm Counterpoint. India’s smartphone user base increased to 220 million by the end of last year.

Nearly 50% of the mobile phones sold in India last year were ‘Made in India’, and nearly 40% of the total shipped units were smartphones. Online retailers seem to have caught the customer’s imagination in the country, with almost one in three smartphones sold through Internet.

As for phone vendors, Samsung topped the charts both in smartphone as well as feature phone segments, with local company Micromax coming in second. The remaining three spots were claimed by India’s Intex and Lava, and China’s Lenovo.