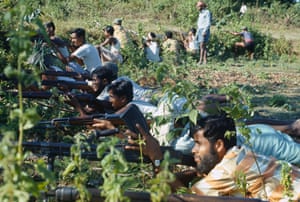 Misleading images claiming to depict violence in Myanmar and being being shared on social media are sowing distrust and undermining the work of human rights group, say campaigners.

As real attacks have escalated, graphic images, in some cases relating to atrocities elsewhere, are being posted alongside claims of violence both by the Rohingyapeople, and against them.

Circulation of misleading images follows an eruption of violence in Rakhine state that has killed more than 400 people and triggered an exodus of 40,000 Rohingya Muslims into Bangladesh.

The most recent conflict began when insurgents attacked Myanmar security forces, prompting a huge counter-offensive by the military. Refugees who arrived in Bangladesh last week reported villages raided and burned down by soldiers. The government claims rebels have burned their own homes and killed Buddhists and Hindus, a claim repeated by some residents.

The violence has led to a flood of social media posts purporting to depict torture and killings. Last week, the Turkish deputy prime minister, Mehmet Simsek, was criticised for tweeting graphic images of corpses, alongside a message warning of a massacre against the Rohingya. “Stop turning a blind eye to ethnic cleansing in #Arakan #Myanmar Int’l community must act now,” he said on Twitter. He later deleted the tweet and issued a correction after readers questioned whether the images depicted Myanmar.

His post was shared more than 1,600 times online and liked by more than 1,200 people. One of the photographs had been taken in Rwanda in 1994.

“We’re trying to work with the Rohingya community and other communities in Myanmar to document the human rights abuses that are taking place, which are horrific. But when false images are connected to otherwise legitimate allegations it discredits all of the work that’s being done to document and establish the truth,” said Smith, speaking from the Bangladesh border.

The difficulty of checking the authenticity of images is a longstanding challenge for researchers. Last year, a United Nations Human Rights Commission reportassessing potential human rights violations against Rohingya people, stated that it would not use any photograph or video that had it had not taken itself.

Images shared by Simsek prompted allegations on Twitter that reports of human rights abuses against Rohingya people are fake. Meanwhile, an image being shared which claimed to prove that Rohingya are militia has been shown to depict soldiers training in Bangladesh.

Smith said a range of misleading footage was being shared – either unwittingly or as part of a coordinated attempt to discredit rival narratives. “Mixed in there are very large number of well-meaning people who genuinely believe the international community has got it wrong, and I think that’s the profound aspect of what’s happening among discourse in Myanmar.”