At MWC 2019, HMD Global announced five new phones that included the Nokia 9 PureView, Nokia 4.2, Nokia 3.2, Nokia 1 Plus and Nokia 210 feature phone. Of these, the Nokia 4.2 and Nokia 3.2 are the only ones that offer a new feature that sees a notification LED in the power button on the side. This is a feature that could very well be part of future Nokia phones, if consumers react positively to it, which is why HMD has trademarked the design.

The company applied for a design patent for the Nokia 4.2 on November 1, 2018, and the European Union’s Intellectual Property Office, or EUIPO, granted the patent on March 7, 2019, reports NokiaMob. The report adds that HMD has also been granted the patent for the Nokia 210 as well. The notification LED in the power button falls under the “mobile phones (part of)” category. This has been designed by Richard Choi, an award-winning designer who works as Industrial design specialist at HMD Global. 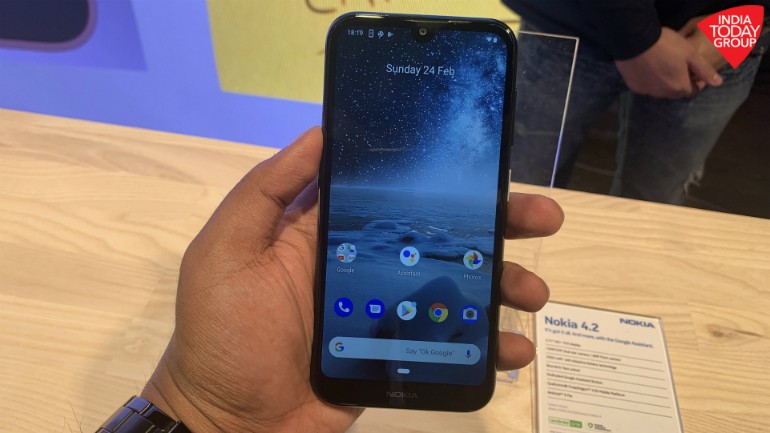 The LED power button on the Nokia 3.2 and 4.2 offers a unique solution for consumers to know when they have received calls, messages or any other notification. By placing the LED light on the side of the frame, you will be able to see notifications even if you place your phone face-first on a flat surface. Moreover, the design does offer a very unique look for these Nokia phones. On the Nokia 4.2, the LED light glows around the power button like a halo, while on the Nokia 3.2 you get a strip of LED light on the surface of the button.

At MWC 2019, we took a look at the Nokia 3.2 and 4.2 phones up close and found the notification LED-cum-power button to look quite interesting and appealing. Moreover, these are also the first pair of Nokia phones to offer a dedicated Google Assistant button, which may come to more Nokia phones in the future depending on consumer reaction.

Both the Nokia 4.2 and 3.2 are the first pair of Nokia phones to sport waterdrop displays. The Nokia 4.2 sports a 5.7-inch HD+ display with a 19:9 aspect ratio, while the Nokia 3.2 comes with a bigger 6.2-inch HD+ display with a similar aspect ratio. The Google Assistant button on the left side will allow users to easily invoke Assistant on the go, something HMD feels will be appreciated by consumers as the Google AI becomes ever so popular.

The Nokia 4.2 and Nokia 3.2 are powered by the Qualcomm Snapdragon 439 and Snapdragon 429 chipsets, respectively. The Android One devices ship with stock Android Pie with new gestures and features like Digital Wellbeing, App Slices, App Actions, Do Not Disturb and so on. The Nokia 4.2 and 3.2 come with a starting price of USD 169 (Approx Rs 12,000) and USD 139 (approx Rs 9,800), respectively and have been announced to go on sale in select markets in April.