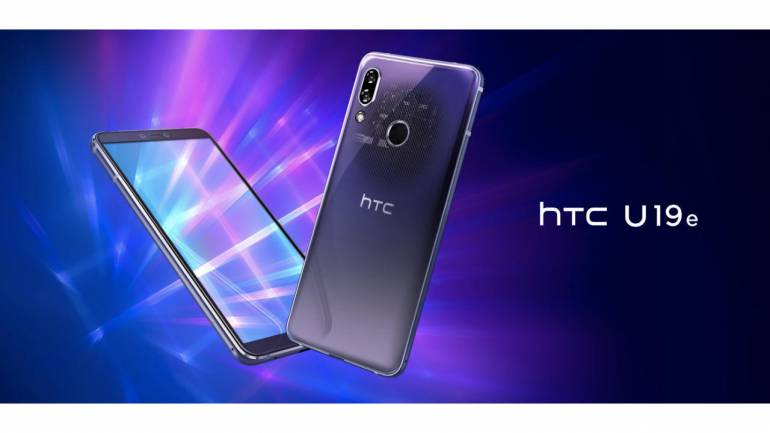 HTC has launched two new mid-range smartphones called U19e and Desire 19+ in Taiwan. Once a smartphone giant, HTC, has launched new smartphones after a gap of over six months. The Desire 19+ is HTC’s first smartphone with a triple camera setup, whereas the U19e comes with two cameras at the back. Both the devices run on Android 9 based Sense UI out of the box.

HTC U19e is the premium smartphone amongst the two launched in Taiwan. The smartphone costs TWD 14,900 (approximately Rs 33,000) and comes in Modest Green and Extraordinary Purple colours.

It features a 6-inch Full HD+ OLED display with a resolution of 1080*2160 pixels and an 18:9 aspect ratio. Unlike the current trend, HTC U19e’s front panel sports thick bezels at the top and bottom. The screen supports HDR10 and comes with Corning Gorilla Glass for added protection.

Under the hood, U19e gets a Qualcomm Snapdragon 710 SoC with a sole 6GB RAM variant. It gets 129GB internal storage, which can be further expanded via microSD. There is a 3,930 mAh battery with Qualcomm’s QuickCharge 4.0 support.

For optics, there are two cameras at the back, which consists of a 12MP f/1.8 primary shooter and a 20MP f/2.6 telephoto lens. For selfies, there is a 24MP front camera with an aperture of f/2.0. U19e also gets a 2MP iris scanner for facial recognition. As an alternative, there is a rear-mounted fingerprint scanner in the centre.

The second smartphone launched in Taiwan is Desire 19+, which features a 6.2-inch HD+ display with 19:9 aspect ratio and a resolution of 720 * 1520 resolution. The screen has a water-drop notch on top for the front camera sensor.

At heart, Desire 19+ gets a Mediatek Helio P35 Octa-core processor paired with 4GB/ 6GB RAM and 64GB/128GB memory. For optics, the rear triple camera setup includes a 13MP f/1.8 primary sensor, coupled with an 8MP ultra-wide angle lens and 5MP depth camera. The front camera consists of a 16MP sensor with an aperture of f/2.0 and auto HDR, face-unlock support.

Desire 19+ includes a 3,850 mAh battery and comes with a fingerprint scanner at the back.