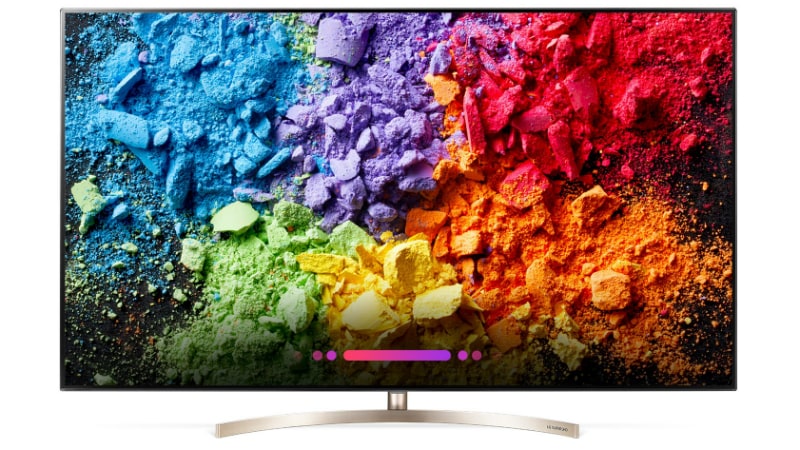 LG Electronics on Monday announced the launch of its 2018 TV lineup with new OLED and Super Ultra HD models at an event in South Korea. These new TVs feature LG’s ThinQ artificial intelligence (AI) technology and the company’s α (Alpha) processor. Ten new models have been launched in the OLED TV range including W8, G8, E8, C8, and B8. On the other hand, nine new models in the Super Ultra HD range have been unveiled, including SK80, SK85, and SK95.

Each model in the 2018 lineup of LG’s OLED TVs has a different highlight like Picture-on-Wall, One Glass Screen, Picture-on-Glass, and Cinema Screen Design. LG says the Alpha processor allows the OLED TVs to offer better image rendering and colour reproduction with enhanced viewing angles. The TVs also have Dolby Atmos audio technology with screen sizes range from 55 to 77 inches.

The SUHD TV variants of LG’s 2018 lineup come with an LCD display that has features like Nano cell and FALD backlighting. These models are also claimed to offer improved shadow details, better image rendering, and accurate colours with good viewing angles. Even the Super Ultra HD models come with Dolby Atmos audio technology. Screen sizes vary from 49 inches all the way up to 77 inches.

LG’s ThinQ AI technology allows users to connect their TVs to other smart home gadgets such as smart lights, portable speakers, vacuum cleaners, and so on, via Bluetooth or Wi-Fi. LG’s proprietary Natural Language Processing (NLP) will be made available in 14 countries including US, UK, Canada, Brazil, and Australia.

Separately, LG’s Alpha 9 processor has been designed to support a higher frame rate of up to 120 frames per second. TVs in both categories also support Cinema HDR that comes with HDR10 and Enhanced Dynamic Tone mapping.

“Our top-tier OLED and SUPER UHD TV lineup for 2018 demonstrates the highest advancement in TV technology. LG continues to be at the forefront of the global display industry by offering consumers the best possible viewing experience with technologies such as ThinQ AI and advanced industry-leading processors,” said Brian Kwon, President of LG’s Home Entertainment Division.