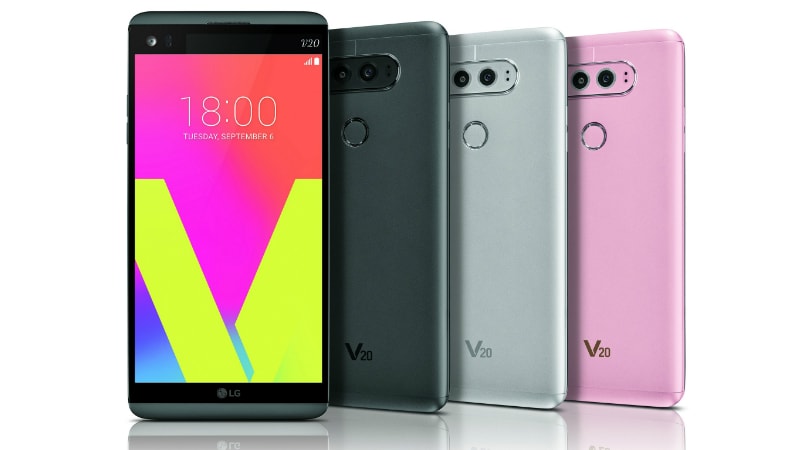 LG just took the wraps off the much awaited LG V20 at an event in San Francisco. The smartphone is expected to arrive in LG’s home market Korea first, and will make its way to other markets, including India, soon after. Falling in line with Google’s confirmation, the LG V20 is the world’s first device to run on Android 7.0 Nougat fresh out-of-the-box.

The LG V20 is a significant upgrade on its predecessor LG V10, and it sports a new design, a new camera setup, and more audio features. Let’s take a look at all the big new features that are packed inside the LG V20, to see the extent of the upgrade.

(Also see: LG V20 Full Specifications)1. Design and build
The LG V20 improves a lot in terms of design, and sports a full metal body, with no modular chin. The LG V10, in comparison, had a plastic top, a metal edge, and a rubber back cover. The new design hasn’t stopped LG from introducing the increasingly rare removable back cover (for the removable battery) with a unique latch mechanism.

2. Dual rear camera
One of the major additions is the dual rear camera for better photography. The LG V20 sports a 135-degree 8-megapixel lens accompanied by 16-megapixel 75-degree lens. At the front, there is a 5-megapixel 120-degree wide-angle lens for more composition in selfies. The Auto Shot feature in the front camera detects when you are smiling and automatically clicks a selfie.

The LG V20 even comes with a Hybrid autofocus (AF) feature that essentially houses three AF mechanisms – Laser Detection AF, Phase Detection AF and Contrast AF. The camera automatically decides which AF is best for a particular shot and captures it accordingly. This essentially enables sharper photos even in low lightning conditions. OIS 3.0 is also thrown in for better motion photography. Just to recap, the LG V10 had a dual front camera setup (one wide-angle lens, and one standard lens) instead, and focused more on selfie photography.

3. Android 7.0 Nougat
As mentioned, the LG V20 is world’s first smartphone to run on Android 7.0 Nougat. LG has introduced a new LG UX 5.0+ skin on top with few added customisations. Notably, the LG V20 comes with Google In Apps Search that allows users to use the Google app to find content from built-in and third-party apps. There is also the Multi-window mode that lets you run two apps side-by-side.

(Also see: Android 7.0 Nougat Is Here: 8 New Features You Need to Know About)

4. Second Screen
The LG V20 brings back the tiny secondary display on top of the screen, and even offers the same 513ppi pixel density. But the Second Screen on the LG V20 is twice as bright, and the font size is 50 percent larger than what was seen on the LG V10. There’s also the new Expandable Notifications feature that lets users tap a button on the Second Screen to enlarge notifications in order to check long messages at a glance and quickly send a reply, or share information. As for the main display, it features a 5.7-inch QHD (1440×2560 pixels) IPS Quantum Display, just like the V10.

5. Audio features
The LG V20 is said to be the world’s first smartphone to sport a 32-bit Hi-Fi Quad DAC (with support for flac, did, diff and alac file formats), which claims to deliver clear sound by reducing distortion and ambient noise by up to 50 percent. It can also record Hi-Fi videos and the optional Low Cut Filter (LCF) technology can apparently remove unwanted background noise and Limiter (LMT) while recording audio, which can now be captured using 24-bit/ 48 kHz Linear Pulse Code Modulation (LPCM). Additionally, it also comes with built-in HD Audio Recorder and B&O PLAY speakers, to keep the audiophile in you happy.