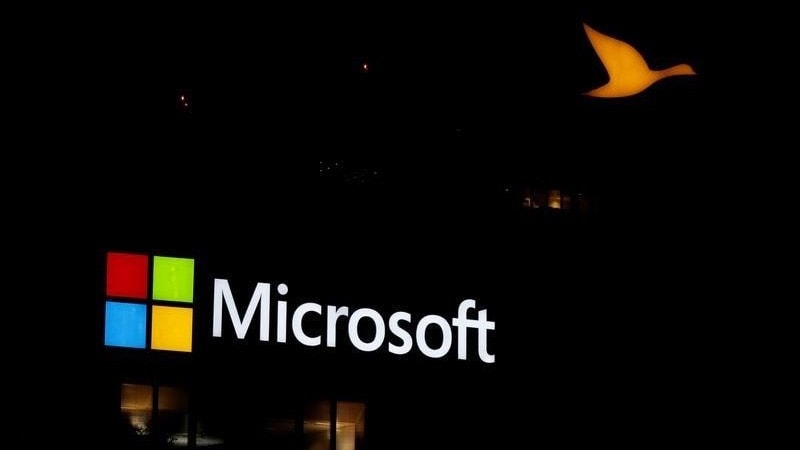 Profit excluding certain items was 76 cents a share on adjusted sales of $22.3 billion (roughly Rs. 1,49,209 crores), the Redmond, Washington-based company said in a statement Thursday. Analysts on average estimated profit in the period ended September 30 would be 68 cents on revenue of $21.7 billion, according to data compiled by Bloomberg. Shares surged to a record in extended trading.

Chief Executive Officer Satya Nadella has been investing in data centers and striking partnerships to bolster sales of Microsoft’s main corporate cloud products, Azure and Office 365 – internet-based versions of the popular productivity apps, e-mail and collaboration tools. Revenue from Azure cloud services more than doubled, helping Microsoft outperform even as demand for PCs remained in the doldrums and its mobile-phone efforts collapsed.

“Cloud is growing significantly and Azure represents incremental new revenue,” said Mark Moerdler, an analyst at Sanford C. Bernstein & Co., who rates the shares outperform. “Commercial cloud is driving revenue growth, which is somewhat hidden by the fact that Nokia is going to zero.”

Microsoft shares jumped as much as 6.2 percent in extended trading following the report, after losing less than 1 percent to $57.25 at the close in New York. If the gains hold when US trading opens tomorrow, the stock will top its all-time high – reached in 1999.

“This transition to the cloud represents the single largest addressable market opportunity we’ve all seen in many, many years,” Chief Financial Officer Amy Hood said after the report. “There is such an opportunity to grow our overall revenue and do it profitably.”

Hood said half of the earnings-per-share estimate beat was because of strong sales, and half was related to a lower-than-expected tax rate and other income. Net income in the recent period declined to $4.69 billion (roughly Rs. 31,380 crores), or 60 cents a share.

Earlier this month, on a swing through Europe, Nadella said the company has spent $3 billion – $1 billion in the past year alone – on data centers on the Continent to expand cloud services. He promised continued investments there, including new sites in France next year. Hood said in July that gross margins for commercial cloud would “materially improve” in the current year. That’s because previous years of investment are starting to pay off as those data centers support more customers. Commercial cloud gross margin in the recent period was 49 percent, 7 points wider than in the prior quarter.

Microsoft has pledged to reach annualised revenue of $20 billion (roughly 1,33,840 crores) in its corporate cloud business by the fiscal year that ends in June 2018. That metric stood at more than $13 billion at the end of the fiscal first quarter. The company has been adding customers and workloads for its Azure services, which let clients run and store applications in Microsoft’s data centers.
Elsewhere in the cloud business, paid users for the company’s Salesforce.com rival, called Dynamics CRM Online, grew more than 2.5 times. Overall, Dynamics product revenue rose 11 percent. The two companies’ rivalry has intensified in recent months after Microsoft beat out Salesforce in bidding for LinkedIn Corp. Since then, Salesforce has asked European regulators to scrutinize the $26.2 billion deal. Hood reiterated on Thursday that Microsoft expects the acquisition to close in the December quarter.

PC market
Worldwide PC shipments in the September quarter were a smidgen better than expected – a decline of 3.9 percent, compared with a 4.1 percent drop in the prior period, researcher IDC said. Still, chipmaker Intel Corp. saw its shares plummet by the most in nine months after a disappointing fourth-quarter sales forecast signaled lackluster demand for PCs heading into the holiday shopping season.

Microsoft in July admitted it won’t meet its goal of getting the Windows 10 operating system on 1 billion devices within two to three years of the 2015 release of the software. The company blamed the shortfall on the decision to all but exit the phone hardware business and insisted this year would be a good one for corporate adoption of the system. Analysts are waiting to see evidence.

“I’m not yet ready to call success, but we are seeing enough people doing enough prep work for it that it’s quite possible we could see a jump in adoption on the corporate side,” Moerdler said.

Windows, Gaming
Sales in the company’s More Personal Computing business, including Windows and Xbox, slipped 1.8 percent from a year ago to $9.29 billion. That compares with the $8.88 billion average estimate of five analysts polled by Bloomberg. Microsoft also reported a new metric for gaming revenue for Xbox and PC, saying it was $1.9 billion last quarter.

For the fiscal second quarter, the company said Productivity revenue will be as much as $7.1 billion, while Intelligent Cloud sales will be $6.55 billion to $6.75 billion. More Personal Computing, the unit most impacted by holiday sales of computers and video games, will be $11.2 billion to $11.6 billion, Hood said on a conference call.