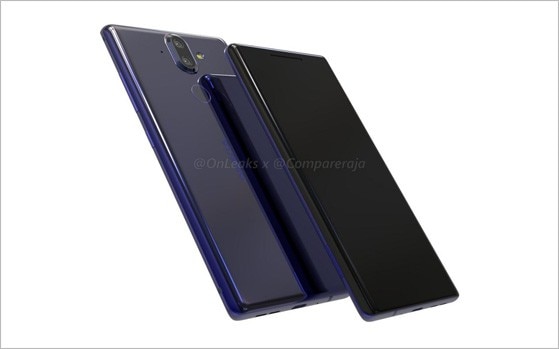 After Nokia 8, HMD Global is reportedly preparing to bring another Nokia phone in the premium category. This is the Nokia 9, as rumoured. This is not the first time that we have been hearing about the Nokia 9. There have been a lot of rumours and reports circulation on the internet about the smartphone over the past few months now. But now, something very substantial is revealed by a new OnLeaks report. It basically reveals how the Nokia 9 is going to look like.

Going by the leaked report, Nokia 9 will come with ‘thin bezel’, however, didn’t reveal the actual outline of the screen. Nokia 9 is further expected to come with dual cameras at the back. With that, the upcoming Nokia 9 will be the second phone by HMD Global to come with two cameras at the back. Nokia 8 was also launched with dual cameras with a ZEISS powered dual camera setup at the rear. The primary cam comes with 13-megapixel RGB sensor coupled with optical image stabilisation and a secondary which includes 13-megapixel monochrome sensor.

As per rumours, Nokia 9 is going to be pretty much alike as the Nokia 8. The smartphone is expected to come with either 12 or 13-megapixel sensor at the back. But then, whether the device will come with ZEISS powered camera or not is the question which only time will reveal.

According to the speculated specifications, Nokia 9 will feature a 5.5-inch AMOLED panel with Quad HD resolution and will be powered by the latest processor by Qualcomm aka the Snapdragon 835 chip. Nokia 9 is further tipped to come with 4 gigs of RAM with either 64GB or 128GB of internal storage. On the software front, considering the time the Nokia 9 may launch, the device may actually come with the latest Android version – Oreo.

Nokia 9 is rumoured to launch sometime around October. However HMD Global – as of yet – has not revealed any details about the Nokia 9 launch. Meanwhile, HMD Global is working on another budget phone, which may be called Nokia 2. This – Nokia 2 – is expected to be the cheapest Android phone by the company until date – cheaper than Nokia 3. On the other hand, Nokia 9 is said to be a little cheaper than the Nokia 8 which comes at a price tag of Rs 36,999. Nokia 9 may bridge the gap between the Nokia 6 (available at Rs 14,999) — which is a budget phone and Nokia 8.