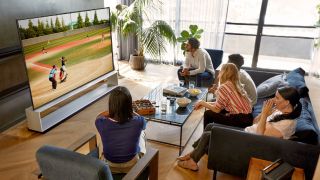 It’s going to be a good year for LG TV fans. The Korean electronics company has made some huge strides forward with its new Alpha 9 Gen. 3 Processor, and has announced a bunch of new 8K models that can upscale HD content to a gorgeous 7680 × 4320 resolution.

To that end, expect over a dozen new series of TVs from LG in 2020 including six series of OLEDs, four Nano Cell series and three UHD TV series.

With there being so many different models to take in, though, we thought we’d lay out the whole 2019 lineup announced so far, from the high-end OLEDs to newly announced 8K NanoCell TVs, in one, admittedly long, piece.

It’s worth noting that specs might change by the time these TVs reach store shelves later this year, but for the most part what you’ll see below are the final specs and features in the final product.

Like last year, the biggest upgrades are the processors – the new Alpha 9 Gen. 3 AI and Alpha 9 Gen. 3 8K AI. The former uses a four-step upscaling algorithm while the latter uses a six-step process to reduce noise and enhance the picture.

Beyond the new processor and additional 8K models, the LG 2020 lineup is the first time we’ll see a new 48-inch OLED screen size for the C-Series. LG hasn’t announced how much the new 48-inch OLED will cost, but considering that last year’s 55-inch C9 OLED is just hovering above the $1,000 mark, this may be the first year we’ll see a sub-$1,000 OLED at launch.

On the software side of things, WebOS will be getting a number of tweaks that will make getting to content quicker and easier like Sports Alert that lets you track when your favorite team is playing, get live updates from their games and lets you jump to that game whenever it comes on if it’s available.

Lastly, at least a few LG OLED TVs are capable of utilizing Dolby Vision IQ, a new technology that uses a built-in light sensor on the TV and Dolby Vision dynamic metadata to optimize picture quality for the amount of ambient light in the room.

The most affordable LG OLED is the one that, unfortunately, comes out the latest. It’s the LG BX OLED and it’ll most likely be available in three sizes (55-inches, 65-inches and 77-inches) in between May and August of 2020. As the cheapest member of the OLED family, the BX will use the slightly less powerful Alpha A7 Gen. 3 Processor instead of the A9 which means it doesn’t benefit from AI upscaling, a pretty essential feature if you’re thinking about buying 77-inch OLED TV this year.

One step above the entry-level BX series is the 2020 CX OLED, a successor to last year’s award-winning LG C9 OLED, and the first TV in the OLED lineup to use the Alpha 9 Gen. 3 Processor. As we mentioned earlier this is the first time LG is offering a 48-inch version of the TV, so if you’ve wanted a slightly smaller OLED for your bedroom, the new CX OLED is one to forward to. It sits on a unibody stand or can be wall-mounted.

So, slight change in the lineup this year – there’s no E-Series OLED in 2020. Instead what we get is the new GX ‘Gallery’ Series OLED that mounts on the wall and has ports located right on the back. It’s a similar design to the W-Series ‘Wallpaper’ design you might have seen in past years, but by integrating the ports right into the TV instead of an attached soundbar, you’re able to hook the TV up to whichever sound system you’d like. It’s also worth noting that this is the first TV in the range to support ATSC 3.0.

That said, you’ll still see a single new model of the LG WX ‘Wallpaper’ Series in 2020, available later this year in a 65-inch screen size. Like years prior, it will still use an attached Dolby Atmos soundbar as a hub for inputs and outputs and need to be mounted. If you want something bigger than 65-inches, LG says that the 77-inch version of the W9 OLED will be available this year as well. It also supports ATSC 3.0.

The penultimate OLED this year is the LG Signature ZX – LG’s only 8K OLED TV. Because it’s 8K, it uses the higher-end Alpha 9 Gen. 3 8K AI chip with deep learning to offer better upscaling to fill all those pixels and hands-free voice control thanks to a built-in microphone that responds to ‘Hi LG’. It was easily one of the best TVs we saw at CES 2020 this year, and we can’t wait to try it out in our own home later this year.

OK, so the Rollable OLED TV missed its debut in 2019 but LG has said repeatedly that this will be the year that you’ll be able to buy the Rollable OLED with the new Alpha A9 Processor in it. That’s the good news. The bad news is that it only comes in a single screen size – 65-inches – that could cost upwards of $60,000. It also won’t be ATSC 3.0-ready, which could be a real disadvantage once stations start broadcasting in 4K HDR. Still, if you’re absolutely loaded and want the coolest TV in town, the Rollable OLED fits the bill.

Dropping down from OLED TVs to Nano Cell LED-LCDs, the first entry in the lineup is the LG Nano85. This series will use the Alpha A7 Gen. 3 Processor and have a native 120Hz refresh rate. It’s also capable of displaying Dolby Vision content as well as passing on Dolby Atmos signal to a compatible sound system. That’s something all the OLED TVs can do, so it’s nice to see it in the more affordable entry-level Nano Cell series. The only downside to this model is that it uses edge-lit LEDs instead of a full array panel which will definitely take a toll on contrast, but again, you get what you pay for.

The LG Nano90 is one step up from the LG Nano85 and the big change is that it uses a full-array panel for better contrast and comes in a larger, 86-inch screen size. Otherwise it has all the same specs and features as the LG Nano85.

Going up one more step is the LG Nano97. It’s the first 8K TV in the Nano Cell lineup and uses the Alpha A9 Gen. 3 8K AI Processor. Unlike the lower-end Nano Cell TVs, the Nano97 will also incorporate the built-in microphone and responds to ‘Hi LG’.

The highest-end Nano Cell TV is the LG Nano99 – another 8K LED-LCD screen and the best one in LG’s 2020 lineup. It only comes in two sizes, but both use LG’s Full Array Dimming Pro technology to give even better black levels and contrast. We’ll have to test it to see how much of a difference it makes, but if you’re afraid of burn-in and really want an 8K LED-LCD, this is probably the model to pick.

The cheapest TV you’ll be able to buy from LG in 2020 is the UN6900/UN6970 – at least in the US. The UK and Australia will get their own budget UHD TVs with most of the same specs, but there’s likely to be some regional variation as well. In the US, expect these TVs to use Active HDR, the basic version of WebOS and a Quad-Core processor. Unfortunately they only have a native refresh rate of 60Hz and use a basic IPS panel.

It’s not a massive step up from the UN6900 but the UN7300 will add smart assistants (Google, Alexa and Siri through AirPlay 2) as well as Sports Alert through WebOS. Unfortunately there’s no Dolby Vision support at this level and the panel runs at a native 60Hz. Both those specs change with the next step up, thankfully.

The highest-end regular UHD TV from LG in 2020 (at least for US customers) is the UN8500 that adds Dolby Vision IQ to the TV as well as the Alpha a9 Gen. 3 Processor. The panel gets upgraded to 120Hz at this level and has some form of local dimming. It’s not going to be as good as the Nano Cell TVs above it, but if your budget is very limited, these will probably offer the best bang for your buck.