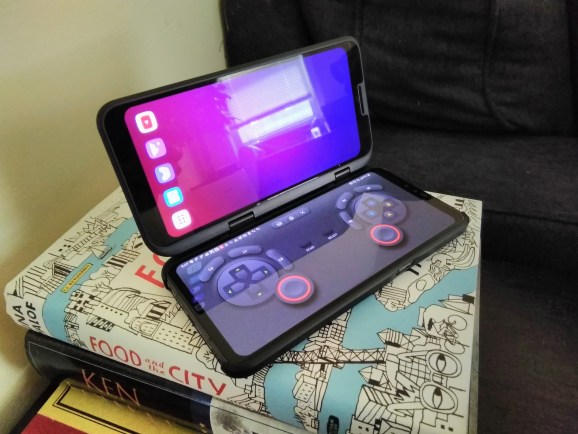 I hold in my hands a smartphone accessory that sports a fully foldable screen. It’s got nothing to do with the beleaguered Samsung Galaxy Fold or Huawei Mate X, nor the half-dozen bendable phone prototypes from brands like Oppo, Xiaomi, Royale, and others. Rather, it’s LG’s Dual Screen, which retails alongside the Korean variant of the LG V50 ThinQ.

The Dual Screen is a clamshell case which adds a display that acts more or less like an external monitor, conferring additional screen real estate without the irremovable bulk of a built-in solution. Aftermarket display cases are nothing new — the Nubia X shipped alongside one with a rear-facing OLED, for example — but the Dual Screen is somewhat novel in that the screen faces inward, much like the secondary display on the discontinued ZTE Axon M and Kyocera Echo.

However, unlike the Axon M and Echo, LG’s Dual Screen doesn’t extend the V50’s display. It instead behaves like a separate window to which you can launch apps or relegate controls. In that respect, it works more or less as advertised, but we couldn’t help but come away a tad disappointed. 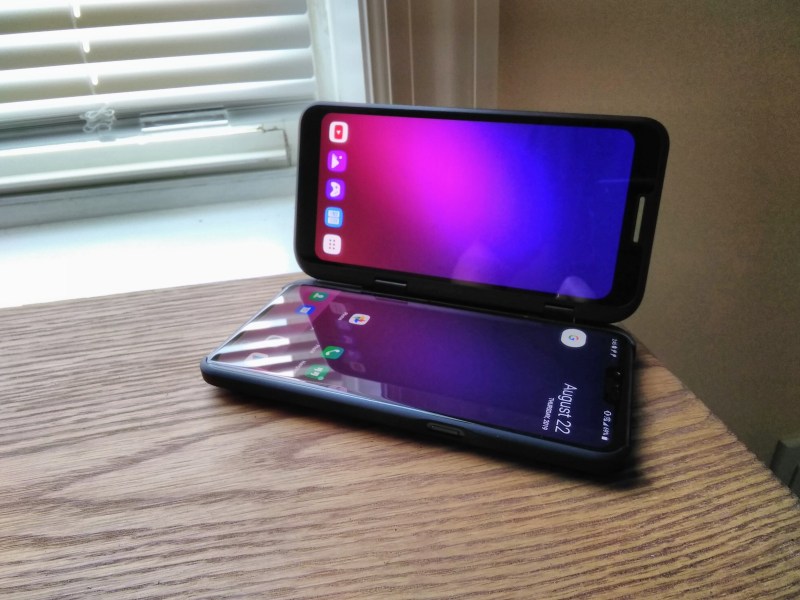 Two screens are better than one

The first thing you’ll notice about the Dual Screen is its piano-black outer cover, which misleadingly resembles a screen right down to the middle-of-center cutout for the earpiece. Unlike that of the Galaxy Fold or Mate X, it’s just for show — tapping the glossy glass does nothing but leave fingerprints.

The inner screen is supported by two thick hinges, which affix to a thick back cover with a square-shaped window that accommodates the V50’s triple cameras and fingerprint sensor. Despite roughly doubling the phone’s thickness (15.54 millimeters compared to 8.3 millimeters) and weight (304 grams versus 173 grams), the plastic case doesn’t do much for durability. The ease with which the cover flips open made me wary of dropping it, lest the screen hit the ground at an angle and shatter. 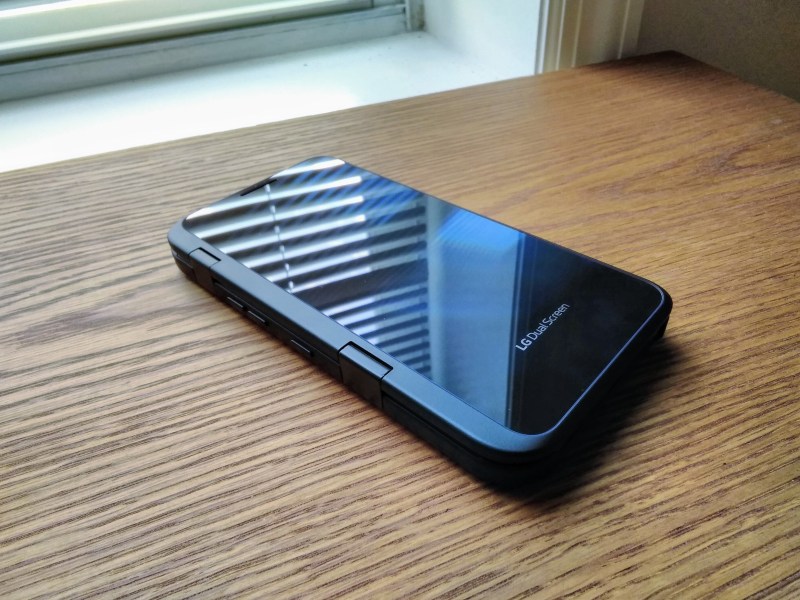 The screen is smaller than the V50’s (6.2 inches versus 6.4 inches) and the tiniest bit blurrier (2,160 x 1,080 pixels versus 3,120 x 1,440 pixels) on close inspection, and it has a different aspect ratio (18.7:9 versus 19.5:9). That’s forgivable, but what isn’t is the severe color imbalance between the two. My Dual Screen review unit skews to the cooler end of the spectrum, in contrast to the phone screen’s warmer profile. (Sadly, the Dual Screen’s color balance can’t be tweaked independently.) It’s not terribly obvious when they aren’t displaying the same app, but it’s one of those things that’s tough to ignore once you’ve spotted it.

The Dual Screen doesn’t require charging, fortunately — it draws power from POGO pins on the V50’s rear cover. As for what’s displayed onscreen, LG says it uses a proprietary short-range, high-bandwidth Wi-Fi chipset to transmit data between the V50 and secondary panel.

The Dual Screen’s software experience is relatively bare-bones, but it worked without a hitch in my testing. When the case makes contact with the V50’s pins, you’ll see a persistent shortcut (which can be optionally hidden) that occupies the left portion of the screen. When you tap on it, you get a list of display options, including one that puts either the V50’s screen or secondary screen to sleep and another that swaps the panels’ content.

You’ll find more granular controls within the Dual Screen settings screen, including a brightness slider for the secondary panel (by default, adjusting the V50’s screen brightness also adjusts that of the Dual Screen) and a wallpaper selector. It’s also here where you’re able to specify which app (if any) opens whenever the secondary screen switches on. 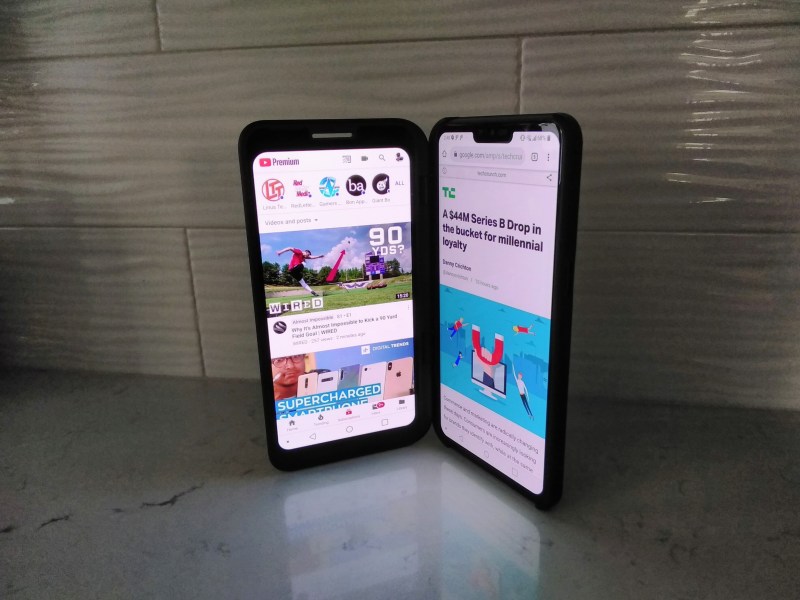 The rest of the Dual Screen’s software, like its hardware, leaves something to be desired. Only a select number of first-party apps truly tap the secondary screen, like LG’s Game Launcher, which places joysticks and buttons on the V50’s screen while reserving the top for game windows. But that’s about the extent of it. I often found myself wishing I could launch ebooks across both displays or browse the web in on one giant two-screen window, but that simply isn’t in the cards currently.

A couple of LG’s suggested use cases include hands-free angle adjustment for the V50’s camera and a “tent mode” for streaming apps like Netflix and YouTube, neither of which require the secondary screen. That’s the Dual Screen’s problem: It’s incredibly limited in what it can do, in part because it doesn’t take advantage of Android 10’s support for multi-screen formats. And at a retail price of $180 in South Korea (the only country where it’s available) on top of the cost of the smartphone itself, that’s a tough sell.